I have previously blogged about the continuing decline in the number of arrests carried out by the Police in England and Wales and the reasons for this, particularly  the shift in Police culture away from arrest now, investigate later to properly and actively considering alternatives to arrest.

This decline was recently reported by the national press.  Here’s the Daily Mail headlines: 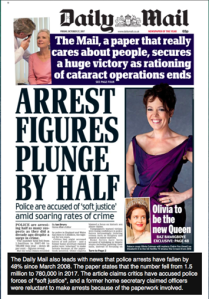 I personally welcome the shift in Police culture away from ‘automatic’ arrest, especially for low level crimes where the suspect is of good character and the offence supported by the evidence of only the alleged victim, having represented too many people who should never have been arrested because there was simply no objective justification for their arrest as opposed to prosecution.

But if a person is not to be arrested and then charged in person,  and instead they are going to be ‘charged remotely’ by delivery of a postal summons at a later date following a voluntary interview, then it is essential that the investigating officer properly records the suspect’s current address and ensures that any postal summons is sent to that address.  Failure to comply with this elementary requirement could have serious consequences as my client, Mr O unfortunately discovered.

On 24 June 2016, Mr O was interviewed by Merseyside Police on a voluntary basis in respect of an allegation that he had committed a Section 20 Assault.  At this time, Mr O tendered his then home address.  Following interview, Mr O was advised that the investigating officer would be in touch.  Several weeks later, Mr O contacted the Police for an update and was advised that the case had been referred to the CPS for review and it could e weeks before a decision was made.

On 23 September 2016, Mr O was the subject of a routine stop check.  He provided his personal details and was advised that there was an outstanding no bail warrant for his arrest in respect of his failure to attend Court on 16 September 2016.

Mr O advised that he had no knowledge of any hearing on 16 September 2016 and/or the said warrant having not received any notification from the police or  notwithstanding his representations, Mr O was arrested on the basis of the no bail warrant.  He was transported to his local Police Station where he was kept in overnight to appear before the Magistrates’ Court.

Mr O eventually appeared before the Magistrates whereupon the Court ordered further enquiries to be made.  Mr O was finally released at approximately 12.30h.

It subsequently transpired that following his interview in June, Mr O was summonsed to attend Court on 16 September 2016.  Unfortunately, an incorrect address was endorsed on the postal summons.  The investigating officer gave the Court Mr O’s old home address that had been extracted from Police records. In fact, Mr O had not lived at this address for 10 years.

Mr O contacted me to pursue a claim.  I had to advise Mr O that any claim for the tort of False Imprisonment would fail;  Mr O had failed to attend Court, the Court had issued a warrant and Merseyside Police had then arrested Mr O on the basis of that warrant. Although the Police had in effect instigated the wrongful arrest by reason of failing to use Mr O’s correct address, the warrant was still technically lawful and therefore they had a cast iron defence on the basis of Section 6 of the Constables Protection Act 1750, which provides (in somewhat archaic language) immunity from any claims arising out of arrest or search under warrant –

“No action shall be brought against any constable… or other officer, or against any person or persons acting by his order and in his aid, for any thing done in obedience to any warrant under the hand or seal of any justice of the peace…without making the justice or justices who signed or sealed the said warrant defendant or defendants,[and] that on producing and proving such warrant at the trial of such action the jury shall give their verdict for the defendant or defendants, notwithstanding any defect of jurisdiction in such justice or justices…”

Clearly, this seemed to leave Mr O in a grossly unfair situation, given that the warrant which gave the Police protection was only issued because of Police administrative error. I therefore considered an alternative basis for Mr O’s claim; one possibility was a claim in the tort of Malicious Process which requires 4 elements –

In this case, 3 of the 4 elements of a successful claim were made out, but crucially not the one requiring “malice” or deliberate ill- intention; this was a serious error by the Police officer handling the case, but there was absolutely no reason to think he had done it deliberately. It was a mistake, albeit one with serious consequences.

That left the options of pursuing the Police on the grounds of the tort of Negligence or, at the opposite end of the spectrum from the archaic Constables Protection Act of 1750, the much more recent provisions of the Human Rights Act or Data Protection Act 1998. As I have explained in other blog posts, the Police enjoy a general immunity from suit in negligence claims connected with their investigative duties, but here I was of the opinion that a Court would find that the Police owed a duty of care to Mr O and that they had breached that duty. The majority of cases in which it has been ruled that the Police cannot be sued for negligence relate to acts of omission rather than commission i.e where the Police have failed to do something rather than taking active steps which initiated the damage (as I firmly believed they had here, by sending the summons to the wrong address in the first place).

An example of this type of claim in practice is the case of Hough v Chief Constable of Staffordshire Constabulary (2001) Times 14 February, CA in which a False Imprisonment claim brought in negligence against the Police failed. Officers had arrested the Claimant in that case because of an incorrect entry on the Police National Computer system, but the officer actually carrying out the arrest had not made that entry and had no reason to believe it was not valid. The Judge in the case, Simon Brown LJ, suggested that the claim should have been brought against the Police either in negligence (on the basis of the mistake of the Police employee inputting the data) or, better yet, under the DPA (for mishandling of the Claimant’s personal data leading to loss and damage).  In my own opinion (although apparently overlooked by the Judge) a claim could also have been brought  under Article 5 of the Human Rights Act.

On behalf of Mr O I was able to successfully argue that his arrest was attributable to the negligence of the arresting officer in that he had failed to update Mr O’s address on the Police system. Following negotiation, I am pleased to report that Mr O’s claim settled by Merseyside Police for £5,300 together with his legal costs.

I was very pleased to be able to use my expertise in this type of case to help Mr O successfully negotiate the ‘no man’s land’ filled with all sorts of legal obstacles that case law and legislation throw in the path of victims of this particular miscarriage of justice. The tightening of Police procedures around the issuing of postal summons, and ever more attention to the correct processing of sensitive and crucial personal data, will hopefully minimise the number of future victims.