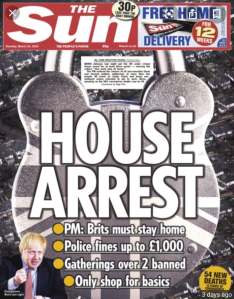 Last night’s headlines confirm that the UK’s Coronovirus “lockdown” is to continue and reminded me of the dramatic headlines of 3 weeks ago; the “End of Freedom” according to The Daily Telegraph while the Sun had a picture of a giant padlock on its front page with the headline, “House Arrest”.

Coincidentally, only a few weeks before the lockdown began, in the case of R (on the application of Jalloh) (Respondent) v the Secretary of State for the Home Department (Appellant), the Supreme Court was obliged to consider and decide whether a man held under house arrest could be said to have been imprisoned and therefore able to sue the Government for compensation for false imprisonment.

On the 30th October 2013, the Claimant, a Liberian national named Ibrahima Jalloh, was issued with a document headed “Notice of Restriction” by an immigration officer. The notice stated that he was liable to be detained under the Immigration Act 1971 but that he would not be detained. Instead, restrictions would be imposed upon him, specifically an obligation to report to an immigration officer 3 days a week, to live at a specified address and to observe a night time curfew monitored by an electronic tag. The notice continued; “If you fail to comply with any of these restrictions you will be liable on conviction to a fine…. or imprisonment….”. 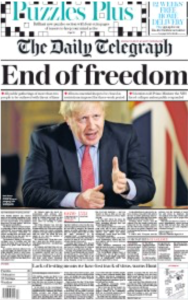 Eventually, the Claimant challenged the lawfulness of the curfew by judicial review and the Court held that the Secretary of State had no power to impose a curfew by way of restriction.

Mr Jalloh then brought a claim for compensation for false imprisonment arguing that he had been confined to his house with no legal basis for long periods of time. The question for the Court then was did the Claimant’s house arrest constitute false imprisonment. Yes, said Mr Justice Lewis at first instance. The Secretary of State appealed. The Court of Appeal now considered the issue. Did the curfew amount to false imprisonment? Yes, said the Court of Appeal. The Secretary of State, apparently with money to burn, lodged a final appeal to the Supreme Court inviting the Court to give guidance as to what “imprisonment” means.

The Supreme Court unanimously dismissed the Secretary of State’s appeal. Lady Hale delivering judgment for the Court, held that the essence of imprisonment is being made to stay in a particular place by another person whether he wants to do so or not. The methods which might be used to ‘imprison’ a person are “many and various. They could be physical barriers, such as locks and bars. They could be physical people, such as guards who would physically prevent the person leaving if he tried to do so. They could also be threats, whether of force or of legal process.”

In Mr Jalloh’s case, the Court was in no doubt that the Secretary of State defined the place where Mr Jalloh was to stay between 11.00pm and 7.00 am every day. There was no suggestion that he could go somewhere else during that time without the Secretary’s permission.

Furthermore, Mr Jalloh’s compliance was “enforced”. He was wearing an electronic tag. If he left his home address, that would be detected and reported. He was warned in the clearest possible terms that should he break the curfew, he would be liable to a fine or imprisonment. In short, Lady Hale found that “the idea that the Claimant was a free agent, able to come and go as he pleased, is completely unreal”.

For those interested, you can read the full Judgment here, or even better, watch it here (note the Supreme Court Judges exercising social distancing at a time when the Covid-19 virus had yet to take over every aspect of our daily lives and work).

I was extremely heartened by this judgment which upholds that principle of protection of an individual’s liberty from State power/oppression which has been central to British Law and society ever since the Magna Carta itself. Such signals from the Supreme Court that the rights and freedoms enshrined in the UK’s “unwritten constitution” are alive and well, will be welcomed by many during the present crisis, when concerns about Police over-reach of powers and encroachment upon our civil liberties are validly held.